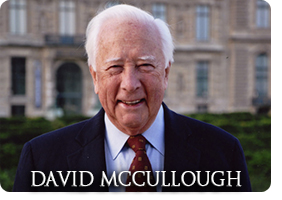 We are doing something a little out of the ordinary this week. We are reaching back into an audio archive to pull out one of my favorite interview experiences of my career. While serving at Moody Radio in Chicago for many years, I had the opportunity to interview some wonderful guests. One in particular stands out after many years– the historian David McCullough. In 2001 his Pulitzer Prize-winning book, John Adams, was released and he came to the studio to be interviewed live on a program called OPEN LINE.  (Later he came back to talk about George Washington and his book, 1776.)

Moody Radio has kindly opened the archive and allowed us to re-broadcast the John Adams interview here on FIRST PERSON.  Mr. McCullough was an extremely engaged guest and very gracious as we talked about the life and faith of Adams. He seemed keenly interested in talking about the faith part of Adam’s biography, both now and in Part Two of the interview which you will hear next week on FIRST PERSON.

NEXT WEEK:  Part Two with David McCullough on the life and faith of John Adams

The host of First Person